Apple computer system 7 lapel pin made in France by Fraisse

Here is a very rare lapel pin bearing the simple mention 7.0. This square and gold lapel pin was published by Apple computer France in 1991 when it launched the new operating system of Macintosh System 7. The launch of a new System version was an event because it was a major evolution of the operating system for Apple Macintosh computers. The first version was launched in May 1991. At Applexpo 91, Paris La Défense, System 7 is widely featured by Apple. This lapel pin was edited by Apple France, realized by Fraisse (a famous french lapel pins manufacturer of lapel pins) and distributed to resellers and customers. This pin is one of the rarest of those published by Apple France.

This is a 4 Mac ranking, rare collectible. We have only 1 of this beautiful Apple System 7 lapel pin in stock, so don’t wait ! 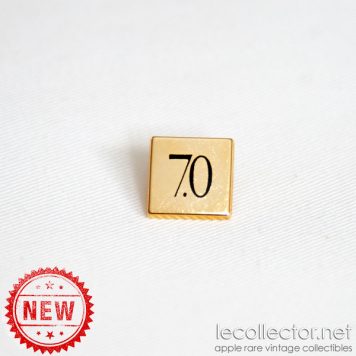