For many years, Apple computers were equipped with Motorola processors. The Lisa computer, as well as the first Macintosh 128k, for example, launched in 1984, was equipped with a 68000 processor. Six years later, in 1990, Motorola announced the 68040 processor of the m68k family. This processor was supposed, in the mind of Apple, to compete with the Intel 80486 processor. The Motorola processor has equipped many Macintosh computers, including the Quadra range, in 1991, Performa, Powerbook. It is also the 68040 processor that fitted the NeXT workstation.

It was on the occasion of the launch of its 68040 processor for Mac Quadra, in 1991, that Motorola had this charming little lapel pin, made to the glory of its new line of processors.

The Motorola 040 lapel pin has the code 040 in white on a black background and in the lower part the logo and name Motorola. To symbolize the power of the new high-end processor, it is an exclamation point that dresses the number 4. The back of the pins bears the logo of the manufacturer. It is ASI, recognizable by its heart-shaped logo. It was ASI who made the legendary Mickey’s Mac Club lapel pin. This is the assurance that this pin is authentic and was probably produced at the initiative of Apple.

This Motorola 040 lapel is extremely rare. Since we collect Apple goddies, this is the first time we have one in stock.

This is a 5 Mac ranking, extremely rare collectible. We have only 1 of this lapel pin in stock, so don’t wait ! 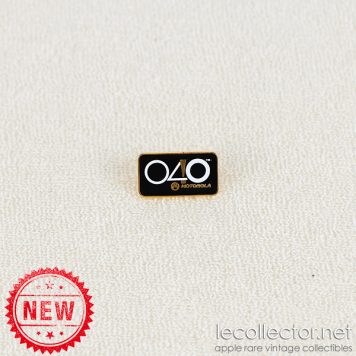