Apple IIGS is the fifth model of the Apple II line, it is also the most powerful. It was launched in September 1986, offering an alternative to Macintosh, launched two years earlier in 1984. The major advantage of Apple II GS was its compatibility with Apple II line software. From an aesthetic point of view Apple II GS takes the codes of the Mac. The initials GS meant Graphic and Sound.

Apple IIGS was a machine with great potential from the point of view of technology but this line did not resist Apple’s desire to focus on the Macintosh platform. The production of Apple II GS computers ceased in december 1992.

This charming and tiny brooch is testimony to the presence of Apple IIGS in the history of Apple computers. This brooch, in perfect condition is a very rare collector’s item. Small in size, it is part of the spindle collection signed Apple (I think of the beautiful and rare Hypercard brooch or Laserwriter II brooch made by Decat Paris).

The brooch is made of cloisonné enamel and film. On the left, the rainbow apple followed by the mention Apple IIgs in golden letters on a white background.

This is a 5 Mac ranking, extremely rare collectible. We have only 1 of this lapel pin in stock, so don’t wait ! 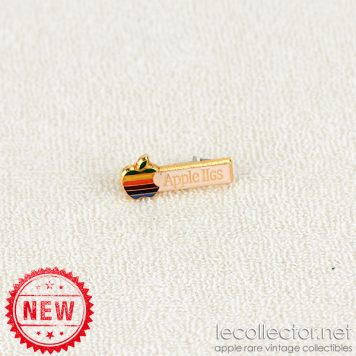